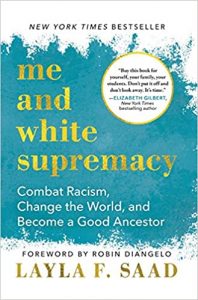 How do we combat racism, change the world, and become good ancestors?

Update 4/13: Those who were unable to attend can watch a recording.

Join us for our next Brown Bag Lunch session on Tuesday April 13 at 12:00pm, featuring a panel discussion with Duke colleagues who will share reflections on their varied racial identities and how those identities have shaped their relationships with white supremacy. The discussion will lead us into our next Book Club series, where we’ll discuss the New York Times and USA Today bestseller Me and White Supremacy: Combat Racism, Change the World, and Become a Good Ancestor by Layla F. Saad.

If so, please join us for the Brown Bag Lunch and register for the Book Club series (see this post for more details)

. We will have special guest panelists to discuss the next Book Club selection, the New York Times and USA Today bestseller Me and White Supremacy: Combat Racism, Change the World, and Become a Good Ancestor by Layla F. Saad.

The Brown Bag Lunch will be hosted by Cathy Rimer-Surles and Karen Collins and feature three non-Duke panelists all deeply engaged in antiracism work. See their bios below.

We hope the talk will inspire you to register to join the Book Club, which begins Friday April 23 and will run for four consecutive weeks from 3pm – 4:30pm.

We’ll add 30 minutes to the end of tomorrow’s Brown Bag Lunch for informal, unstructured conversation like we usually have. You’re welcome to hang out and chat with us after the presentation.

The Brown Bag Lunch will be hosted by Cathy Rimer-Surles and Karen Collins and feature three non-Duke panelists all deeply engaged in antiracism work. See their bios below.

DeDreana Freeman (she/her) was elected to the Durham City Council in 2017 and also serves as Special Assistant to the President of the Durham Children’s Initiative.  Her anti-racism work spans every aspect of her personal and professional life, and she is a founder and core leader of numerous local anti-racism organizations including Organizing Against Racism (OAR) Durham, Episcopalians United Against Racism, and Durham Equitable Economic Partnerships.

Niccole Leilanionapae‘aina Coggins (she/her) is the Editorial, Design, and Production Coordinator and Assistant Project Editor at the University of Virginia Press.  An historian, she is particularly interested in Asian-American and Indigenous Studies and was one of the core developers of the Toolkit for Allies in Scholarly Publishing, the first of three planned guides for allies, for organizations, and for Black, Indigenous, and People of Color developed to disrupt racism and transform scholarly publishing.

Dan McKinney (he/him) is an active leader of Organizing Against Racism (OAR) Durham including OAR’s White Anti-Racist Caucus. He served on Durham’s Racial Equity Task Force and for the past 3 years, he partnered with local youth to identify and address systemic racism inside their schools. More recently, he completed a 16-week, full-stack software engineering course at Momentum and now hopes to merge his new software development skills with his anti-racist work.

Cathy Rimer-Surles (she/her) has until recently served as the Assistant Director for Contracts and Intellectual Property at Duke University Press where she was an active leader of the press’s Equity and Inclusion Task Force.  A dedicated anti-racism organizer and educator in the Durham community, she is also a core leader of both Organizing Against Racism (OAR) Durham and Episcopalians United Against Racism.

Have Questions or Suggestions?

Last summer, members of DiversifyIT gathered to participate in a video project, produced by J. Brandon Johnson, about the impact of the work over the past two years.
Watch the first two episodes: “Everything is a Choice” and “A Cultural Climate Change”
Episode III